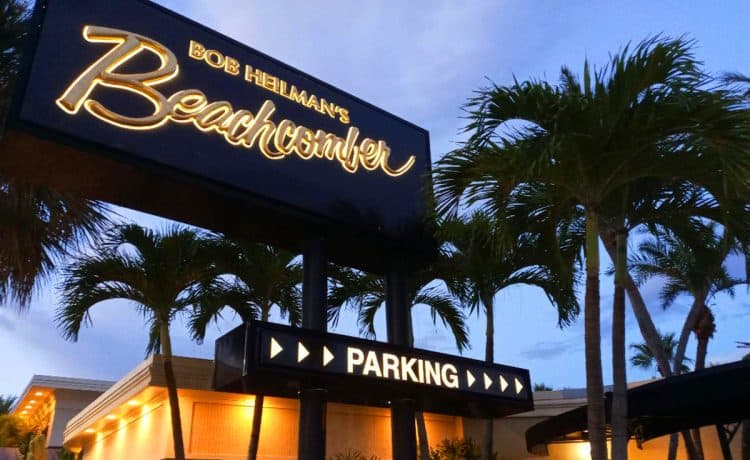 The closest I’ve ever come to giving a chef a hug and a kiss occurred Monday night. Lured by the mouth-watering vision of wife Kelly’s favorite dessert – Baked Alaska – being on the menu of Bob Heilman’s Beachcomber Restaurant on Clearwater Beach, we arrived just after signing off on our weekly radio show.

Entering with masks and observing the host and waiters in masks, we were led to a table socially distanced from other diners. We immediately liked the décor and atmosphere: Upscale yet not snooty, casual yet not sloppy.

We sat on a comfy couch portion of a table for four facing a cavernous dining room with a pianist playing a variety of ditties.

Matthew, delightfully chatty despite the encumbrance of a mask, served us attentively throughout the dinner. Kelly chose sautéed shrimp as the main course while I opted for a bowl of clam chowder and the fried chicken entrée. We also selected salad dressings and chose accompaniments.

Matthew unexpectedly delivered a tray with zucchini and yellow squash sautéed in garlic butter. While I’m not averse to either zucchini or squash, they’re not high on my list of favorite veggies. This preparation, however, was savory, flavorful and literally scrumptious. Score one for the chef. 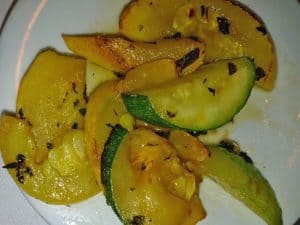 The salad portions were larger than expected and nice starters as well as a bread basket that included yummy ginger-molasses muffins, which we reordered without shame. 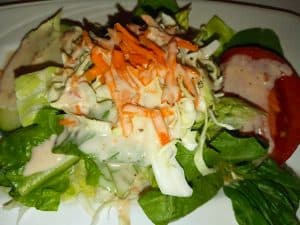 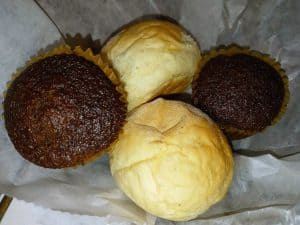 The chowder arrived in a large bowl and the thick, rich broth contained chunks of potato and clam bits, which we shared. Fittingly, the entrées were the stars of the table. Kelly’s shrimp tasted like, well, wonderfully seasoned shrimp. That description might seem redundant, but so often shrimp arrives overly breaded and lathered with seasonings to the point where you can hardly taste the shrimp flavor. Score ten for the chef. 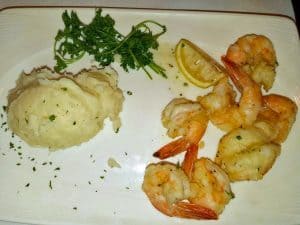 The fried chicken, however, deserves to be in the Fried Chicken Hall of Fame. To be sure, I’d ordered it with trepidation as more often than not chicken arrives overcooked, dry and chewy with the skin either greasy or billowed in batter. Not so at Heilman’s. My eyes glowed as I cut into the thin, crisp skin to behold the firmest breast this side of your favorite non-family magazine. Gleaming with moisture yet not even a tad over- or undercooked, I forked a piece into my mouth and the taste buds did a break dance. Mmmm. I consumed it along with the wings and thigh with all the grace of a bulldog licking a bowl of pudding. Score 100 for the chef. 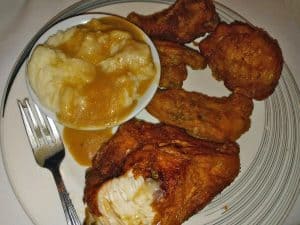 Even that wonderful experience could not prepare us for the two portions of Baked Alaska. Matthew came into view carrying a tray that appeared to be holding the icebergs that sank the Titanic. 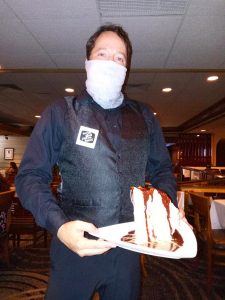 Each was a cliff of creamy vanilla ice cream topped with meringue and dripping in a flavorful warm fudge syrup. Beneath it lie a thin crust to offer crunchiness. These were not just desserts to die for, these were desserts to kill for. Our spoons started a delightful arc from mouth to dessert, and we enjoyed the spectacle of initial scornful glances at our gluttony by nearby diners and then witnessed them ordering their own Baked Alaska’s as well. Even so, neither of us could complete either portion and, living a mere 15 minutes away in Clearwater, we felt no qualms about scooping them into a takeout box. Score 1,000 for the chef. 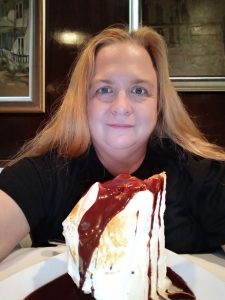 It is here that I hasten to announce, dear reader, that these were not meals on the house in exchange for a review. As well, Heilman’s doesn’t advertise on our radio show. In fact, co-owner Sheri Heilman had no idea of our presence. Next day, I couldn’t wait to call her with a verbal synopsis of our experience. She of course welcomed the positive feedback and I asked about the food quality and preparation.

“We support the local farmers, which I’ve been doing for decades,” she said. “We’re getting info from the produce company we deal with as to what’s fresh and grown in Florida.

“Every morning I’m up early, on the phone, finding out what sold the night before and then put in our orders. We bring in fresh oysters from the cold waters off Boston and softshell crabs still alive in the straw. Fish like red snapper and black grouper come in whole and we fillet them ourselves. We even examine the eyes of the fish to make sure they didn’t sit on a boat too long.” 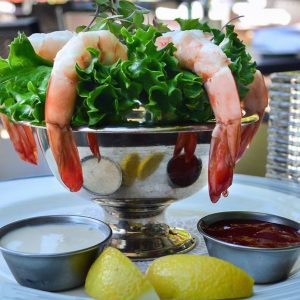 Sheri and husband Bob have restaurant heritage that began a generation ago in Ohio with Bob’s father. 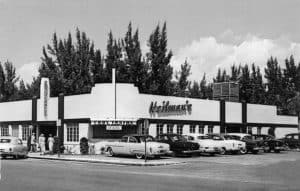 “I’m glad we did it that way because it makes a difference,” Sheri said. “We’ve worked really hard to keep with tradition while also staying current with the times. We’ve achieved customer confidence, and people are relaxed and know they’re safe here.” 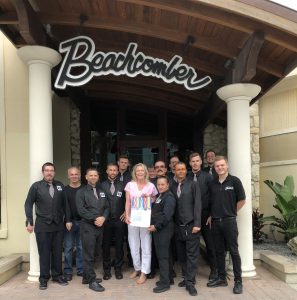 Sheri is a strong advocate of supporting local businesses in Clearwater rather than chain stores and eateries. She’s also the driving force behind Ocean Allies, an organization that intends to do business without causing negative impacts to our marine environment. 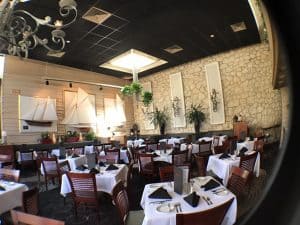 Before ending the call, I just had to know how they prepare the fried chicken. “We use 15 iron skillets on gas burners dedicated just to the fried chicken,” she replied. “It’s a slow, 40-minute process where we keep the lids on the skillets to keep it moist and savory – it’s certainly not like the Colonel’s fried chicken.”

Kelly and I salute our wonderful dinner at Bob Heilman’s Beachcomber Restaurant with the ultimate compliment to all deserving restaurateurs – we’ll definitely be back.

Currently, Heilman’s has a menu that changes daily. Each day’s menu can be found online at www.bobheilmansbeachcomber.com/daily-menu or on Facebook at www.facebook.com/BobHeilmans.