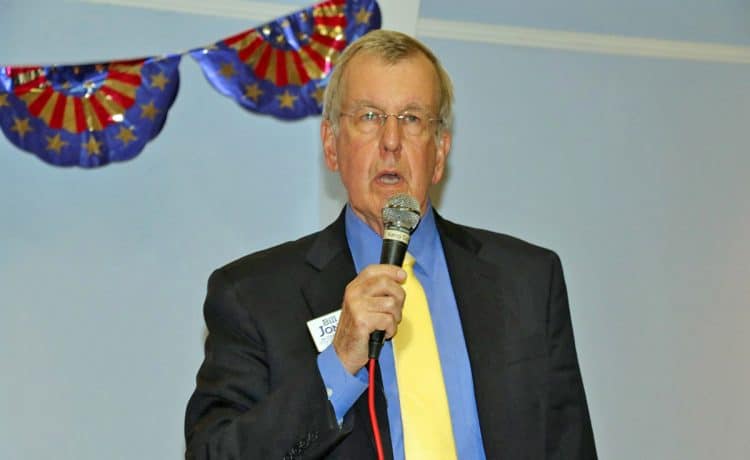 Thirty years ago, billboards and over-sized business signs cluttered major streets in Clearwater – 49 of them along a four-mile stretch. Flashing signs and misspelled words competed for motorist’s attention.

In 1984, Bill Jonson (pronounced JONE son) – visiting from Minnesota for a job interview – thought, “Gee, this place looks kind of tacky. Do I really want to live here?” Jonson got the job and moved his wife and children to Clearwater. He found that many others held the same opinions about the signage. Low-budget motels and low-end retail lined U.S. 19 and everywhere you looked, a forest – not of trees, but signs – jutted out. Although just a newcomer, Jonson went to public hearings and began learning about signage laws. A handful of residents formed Citizens for a Better Clearwater, with Jonson as president, and set out to get the signatures of 10 percent of the city’s registered voters. In 1989, with almost 6,000 validated signatures, city commissioners approved a seven-year schedule for the removal of Gulf-to-Bay billboards.

Born and raised in Wisconsin, Jonson served in the Army from 1967 to 1969, trained as a military police officer. Once commanding officers found out about his accounting background, he served as an auditor/typist in Thailand and Texas. He married, studied information systems at the University of Minnesota, and went to work for Honeywell in Minneapolis as an international auditor, where he traveled to Holland, Spain, France, Scotland, England and around the United States. Jonson wanted to spend more time working in computer systems and Honeywell in Clearwater was looking for someone in that area with an accounting background, so he moved his family there to become Project Manager within Information Systems. Jonson was certified in Project Management and he admittedly became crazy over Clearwater’s lack of project management. Project Management meant getting things done on time, on target and on budget, taking into account cost, quality and schedule. Jonson worked at Honeywell for 30 years and over the years saw the company emphasize continuous improvement, focusing repeatedly on the best processes for more systems.

“In Clearwater city government, there is no measurable process for improvement,” said Jonson. “The city manager has said he is too busy to focus on improvement. He has to spend his time fighting fires instead of making improvements.” Determined and tenacious, Jonson was first elected in 2001 to the city council and has never lost an election since. He termed out in 2007 and was re-elected in 2010 and again in 2014. He admittedly is detail-oriented, doing the homework more than anyone else. He appears seemingly everywhere, dressed in a suit and tie, taking endless notes. He continuously attends events throughout the year, listening to residents, unlike many politicians, who he says only show up before an election. He’s sat on multiple boards: Chairman of TBARTA’s Citizens Advisory Committee, the Pinellas Suncoast Transit Authority, and the Environmental Advisory Board, a member of the Code Enforcement Board and the Beach Roundabout Committee – to look at how to make the roundabout marginally better – and served as President of the Clearwater Neighborhoods Coalition. He’s on the board of Scenic America, the only visual conservation organization. “Scenic America promotes a sense of place,” Jonson explained. “They believe that a place should not look like every other place, but should look like someplace special. “I got involved in 2000 and am still the treasurer of Scenic America [scenic.org] and the chairman of the Florida affiliate. The organization preserves scenic highways, gateways, and promotes undergrounding of power lines and landscape codes.”

After the original concept of Imagine Clearwater was defeated at referendum in 1999, the city fired the then-city manager, Michael Roberto. The city did a nation-wide search and it came down to two candidates, ultimately hiring current city manager, Bill Horne.

“In 2008, the economy was really poor,” explained Jonson. “The city laid off about 200 employees and pension costs were really high. Bill Horne told the council that ‘we can do things okay, but not excellently. I believe we CAN do everything excellently and if we don’t get everything done, that’s okay.'”

In 2001, he beat Frank Hibbard in the mayoral race. When asked what he hopes to accomplish if elected in 2020, he said, “I’d want to improve infrastructure and identify things we can do to move forward. My background will assist in developing a strategy to accomplish this. I will give the city manager objectives and see that he or she accomplishes them.

“My first priority as mayor would be to take responsibility for the process by providing guidance and evaluating the city manager, and also [to] see the community be more collaborative.

Regarding the Church of Scientology, he said, “I deal with everyone equally and make sure everyone follows the laws and enforcement code. Many people don’t know this, but 25% of the Church’s properties ARE on the tax rolls and they are still the biggest tax payers downtown. There are so many things we were going to do in Clearwater that didn’t get done. I will talk to all members of the community and establish working relationships with people. If there are things we can collaborate on, we will get them done; if not, we move on. No one ever holds the city accountable and I will hold it accountable as well.” Jonson believes the city’s strategic plan has no priorities. “My background will assist in developing a strategy to accomplish this.” he said. “A major priority as mayor would be to take responsibility for the process by providing guidance and evaluating the city manager. I will give the city manager objectives and see that he or she accomplishes them. Take Imagine Clearwater, for example. The referendum passed by 75% in 2017. We don’t have support for the amphitheater. It will cost $14 million and will be a huge structure that will dominate the park.”

“We need a feedback form that will collect more data to identify where most of the problems are by applying municipal excellence to the process. We have good [city] employees, but they are not getting the leadership they need.”

Displaying an Excel spreadsheet, Jonson added, “Every two years the city surveys 4,000 residents as to what they are satisfied or not satisfied with, but they do not compare the data to other cities of similar size and that is where they are missing out on the big picture. Clearwater actually scores very low compared to other cities. I would make decisions based on data.” “Another problem is the city’s code enforcement fines which are accruing. There needs to be a schedule of fines. In St. Petersburg, they take the property owners to foreclosure.”

When asked what Jonson wants to do about it, he said, “Not collect the fines, but you do want resolution of the non-conformity.” Above photos by Sean Schrader

Jonson does like the city’s murals. He says, “They are non-commercial, creating a sense of place instead of like you are driving through the Yellow Pages.” With a very busy calendar and utilizing a high tech app to focus knocking on doors of registered voters, Jonson continues to make his presence known around the city, meeting people … and always listening. Above photo by Sean Schrader

Repeating a quote by Benjamin Franklin, he adds, “By failing to prepare, you are preparing to fail.”