Bracing for a Political Tsunami 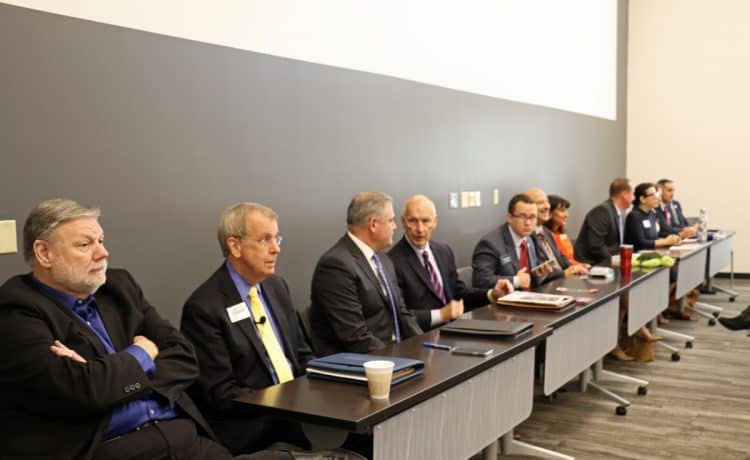 Take a deep breath and rejoice in a respite of Christmas spirit, because starting soon after New Year’s Eve we’re going to be inundated with all things political.

Ads for candidates will be plastered on our TV screens, on our radios, in newspapers, in our mailboxes and all over social media. The reason: March 17th is the presidential primary day in Florida as well as municipal elections. In Clearwater alone, 13 candidates are vying for three open seats on the five-member City Council.

The City races are non-partisan, meaning any registered voter in Clearwater can vote for any of the candidates. It’s also a plurality format, meaning whoever gets the highest total in each race wins even if it’s less than 50% of the votes.

While I’d say a majority of those present already supported one candidate or another, forums like this allow voters to become acquainted with the candidates’ positions on issues.

Each candidate at the forum was given three minutes for an opening statement, after which several general questions were posed by audience members. One such question involved whether the Greenwood neighborhood should receive Community Redevelopment Areas (CRA) funding. That funding allows the county to invest money into needy areas based on real estate tax increment funding.

Sitting near the front of the room across from the tables at which candidates faced the audience, I was somewhat amused to see that three of the candidates didn’t know what a CRA is. That bit of info right there and then informed me who wasn’t familiar with a relatively well-known county funding source.

Other questions involved Scientology and traffic. I took notes of all the candidates’ answers. But before finalizing any decisions for whom to vote, I’ll be attending other upcoming forums beginning in January and leading up to the March 17th election. Some of the candidates also sponsor their own meet-and-greet events around town. Voting will take place via mail ballots, early voting if permitted and at polling places on Election Day.

This Clearwater election will be special for two reasons: It occurs on the same day when mainly Democrats will be selecting their Florida presidential preference, and the City of Clearwater has never drawn this large a field of candidates. In past municipal election, oftentimes only one or two people will run for a seat on the City Council — and occasionally incumbents draw no competition. For example, current Clearwater Mayor George Cretekos was reelected to a second term in 2016 with no opposition.

While I plan on attending all the candidate forums coming up soon, you’d be well advised to attend at least one of them. Seeing and hearing what candidates have to say in person is far more impressionable than the usual rhetoric you get in advertisements and mailings.

Contact info and websites for the candidates can be found here: https://www.myclearwater.com/government/city-departments/official-records-legislative-services/city-elections