HomeHolidayBuy Only the Best Chocolates for Valentine’s Day
HolidayShoppingValentine's Day

Buy Only the Best Chocolates for Valentine’s Day 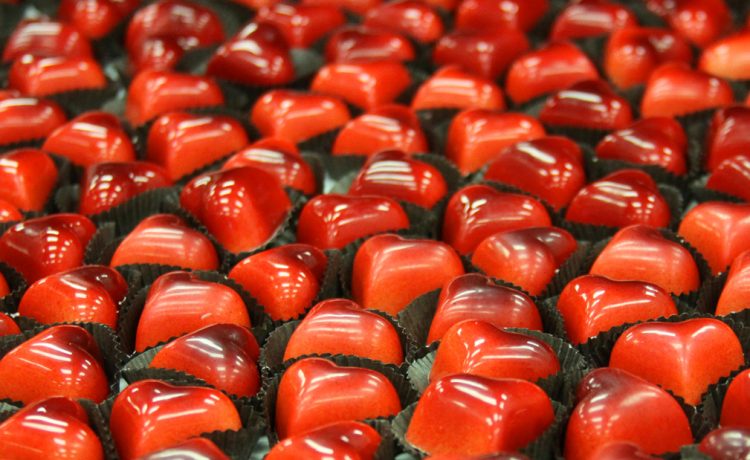 Local chocolatier one of the Top 10 in North America

Sometimes you do need to quit your day job.

William Dean Brown, Jr.,  gave up his high-paying corporate position to follow his passion for what was originally just a hobby: making chocolates.

He became so successful, his artistic creations appeared in the first two Hunger Game movies. The top-grossing movie of 2012, The Hunger Games, shows starring characters Katniss Everdeen and Peeta Malark riding a train with a beautiful plate of colorful chocolates. A yellow-green white chocolate ganache of lemongrass and coconut also appears on Katniss’ bedside table. In the sequel Catching Fire, the hand-painted confections appear at a banquet.

Founded in 2007, Brown named his company William Dean Chocolates in honor of his father (William) and grandfather (Dean). His title is Chief Chocolate Officer. Brown follows the artisan tradition of creating everything by hand in small batches and without preservatives.

And people have taken notice.

Whoopi Goldberg featured his chocolates on the ABC talk show “The View,” mentioning them as one of her favorite edibles. In 2010, Goldberg even served as a judge for the “New Flavor Contest” where nearly 3,000 suggestions were submitted to join the William Dean Chocolate lineup of offerings.

Other celebrity fans include Michelle Obama, Oprah Winfrey, Bill Clinton, Liam Neeson, Robert De Niro and Garth Brooks. The chocolates appeared on the lifestyle show “Daytime” and locally on Bay News 9. They were featured in the New York Times and other major newspapers and magazines. His chocolates have also sold on the Home Shopping Network.

Brown was also named one of the 2014 Top Ten Chocolatiers in North America by Dessert Professional Magazine.

Brown began in a tiny shop in Largo and after three years moved to his current roomy location in Belleair Bluffs. The store sells chocolates, pastries, gelato and candied ginger. His gourmet popcorn in flavors of Macadamia Coconut and Cinnamon Pecan are made with vanilla bean and real honey instead of corn syrup. Every piece is produced by hand.

Brown makes his chocolates from Valrhona chocolate – a French premium chocolate manufacturer that makes its own blend. “It’s the Mercedes Benz of chocolate – the same chocolate used by Bern’s Steak House, the Ritz Carlton and the Four Seasons,” Brown said.

Brown was flown to Switzerland by Felchlin, a high-quality producer of custom-made products from cacao beans. He also uses the Felchlin cacao in his chocolate. The beans are harvested by Indians via dugout canoes and Felchlin pays the Indians 15% to help them.

Brown’s chocolates are sold nationally in Dean & Deluca, a well-known seller of gourmet foods, and at Beacon Hill Chocolates in Boston. Both his candies and pastries – including the French macaron – are sold in popular Datz Deli and Datz Dough in Tampa.

Brown offers a popular Afternoon Tea on Tuesdays and Fridays which include a pot of TeBella Tea with traditional afternoon fare of sandwiches, scones and an assortment of desserts.

For Easter, Brown sells chocolate sheep, bunnies and hand-painted Easter eggs from a half pound up to 12 pounds and 30 inches tall.

His two busiest holidays are Christmas and Valentine’s Day. During Christmas he ships up to 200 boxes per day.

For Valentine’s Day, Brown makes assortments of 19 flavors of colourful, hand-painted chocolates in heart-shaped faux crocodile leather boxes in either a 19- or 28-piece assortment. The keepsake box is his customers’ favorite product every year.

Brown produces about a thousand heart boxes for Valentine’s Day and has always sold out.

William Dean Chocolates at The Bluffs

Most Romantic Restaurant in Clearwater for Valentine’s Day