See the video of the City of Clearwater’s city council candidate forum for Seat 5, which was held on Tuesday, Feb. 16, 2022.

Get to know the candidates who are running for city council in this seat and learn where they stand on issues.

The three candidates running for Seat 4 are: Election Day for Clearwater City Council Seats 4 and 5 is on March 15. The City of Clearwater hosted two  virtual candidate forums for the upcoming municipal election.

Al Reuschel – former senior anchor for Bay News 9, served as the moderator. Reuschel did his own research, generated his own questions and asked them at the forums.

Both forums were online and candidates logged in from wherever they chose. The city did not use a chat box and residents could not raise hands to ask questions. The candidates were all given the chance to answer the questions in the same manner, in order to remain fair.

Residents could stream the forums on the city’s website or YouTube, and watch the forums as observers.

To view the candidate forums on the city’s website, visit www.myclearwater.com/government/city-departments/city-clerk/municipal-election-candidate-information

To view the candidate forums on YouTube, visit www.youtube.com/c/MyClearwater

Video and feature photo courtesy of the City of Clearwater 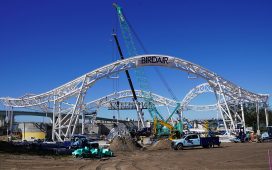