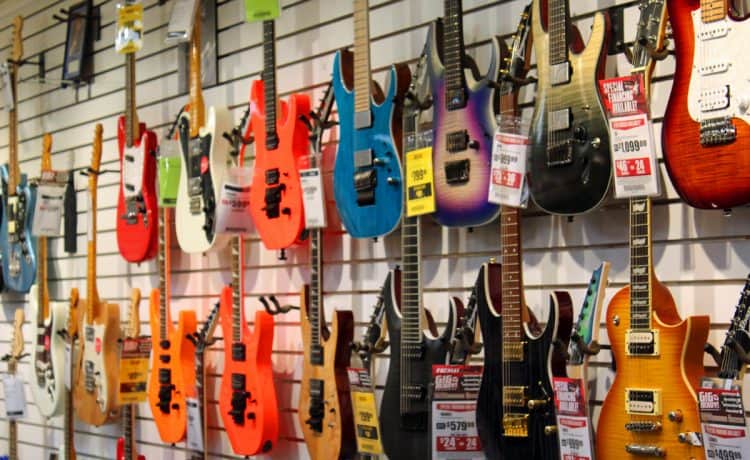 Article and photos by John Lawrence

The Kapok Special Events Center on McMullen Booth Road is well-known for its Greco-Roman gardens with statues spouting waterfalls, as well as its interior and exterior spaces for weddings, anniversaries, and other special events.

Sam Ash Music Store began leasing a section of the Kapok center buildings in 1999, displaying hundreds of saxophones, tubas, ukuleles, guitars, drums, violins – and everything that comes with them – along its walls. 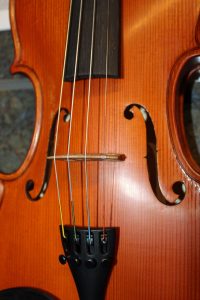 The music store’s domed ceiling runs the length of the building, some 40 feet above a Saturday morning as customers flip through sheet music, run their fingers along the keys of electric pianos, or blow a few bars of music through a red, glittering saxophone. 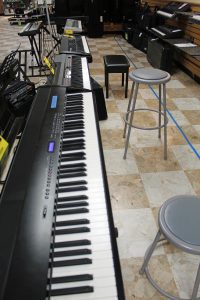 At one end of the hall are two stages: one on each side of the main promenade. Each of the spot-lit stages are piled with speakers and band and stage equipment for sale, including metal catwalks, towers for lights and amplifiers, and mixing boards for live performances. A live performance stage for students who take lessons from dozens of music teachers in the store’s studios sits empty – but only for now. 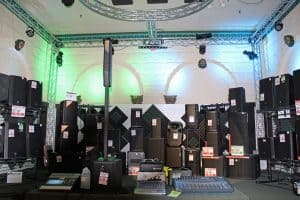 In other sections of the store, one sees microphones, mic stands, music stands, tambourines, stand-up basses, and portable organs – standard fare for bands who play on weekends in the area. There are rows and rows of sheet music for those looking for songs to add to their performance repertoire. 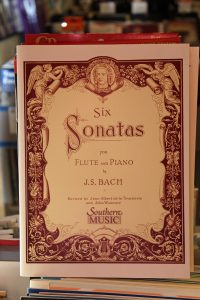 Most importantly, and this is what Sam Ash wants, a pair of guitar players sit on bar stools trading riffs, trying out some new instruments. A few youngsters in the stores are music students from Clearwater’s public schools, looking for band instruments to rent.

The wonderful building at 923 McMullen Booth Road once hosted generations Clearwater’s brides and their families celebrating weddings and other special events is now one of 47 Sam Ash Music Stores, said Danny Russo, the store’s general manager. He began working there nearly 20 years ago, when Thoroughbred Music moved out of the space and Sam Ash moved in. Russo, a friendly and knowledgeable guy, has seen national music stars, aspiring rock ‘n rollers, jazz stars, and classical music students come through the store’s front doors for nearly a generation.

“Anyone who plays music in this area, I know them, or they know me,” he said. “They also know our staff and we create friendships with them so we know what they are looking for.”

“I come here to check things out,” said local musician Jim Driscoll as he checked out a mixing board. He plays a guitar at home and has played out on weekends. “This is a great music store.”
Sammy Ash, the grandson of the founder, said musicians trying out instruments are an important part of “the scene” at Ash’s music store. His grandfather, Sam Ash (Ashkynase) was a violinist who played Gershwin and other popular tunes in a Brooklyn band in the 1920s.

Russo and Sam Ash’s customers include some of Clearwater’s most important musicians, professional and otherwise, Russo said. The store is just down the street from Ruth Eckerd Hall, home to Florida Orchestra concerts and the venue for other well-known acts, such as Ringo Starr, Roger Daltrey and other national acts whose roadies may drop by for last-minute guitar strings, pics, and such.

“Rock and Roll Hall of Famer Robin Zander, the rhythm guitarist and lead singer for Cheap Trick, lives near Clearwater and comes in here,” Russo said. “His daughter was getting vocal lessons here, and her dad is a Number One vocalist out there! We also get members of the Black Honkeys and other local bands. But we absolutely love our beginners, such as youngsters, in our store too.”

Since life began returning to some level of normal since the onslaught of Covid 19, music students have been signing up again. Before Covid hit, the store averaged 1,100 lessons a month, the highest number in the chain, Russo said. Since Sam Ash reopened from noon to 7 p.m. each day, music and vocal teachers, experts in their field, have been signing up an average of three students each day. The store will soon get back on track with its Wednesday night open mike nights, where musicians can form up and jam on the live performance stage. 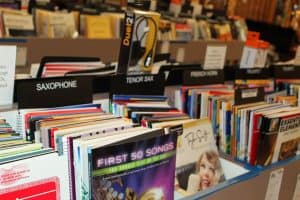 The music scene is not just about individual musicians playing at home or live performances any more. Digital mixing boards and software that allows individual musicians to collaborate in the cloud are the norm these days. Sam Ash on McMullen Booth has Ian Lawson, who teaches studio recording, sound mixing, and all things digital audio and music production for the Internet.

“I teach all kinds of aspects of digital recording, digital audio work stations, live audio setup, teach anything when it comes to recording, editing technique, the mastering part of it, using any and most software,” Lawson said.

In the years after World War I, Sammy’s grandfather and his bride Rose, decided to open a music store in Brooklyn, but they lacked enough savings. They supplemented their investment by selling the $400 engagement ring he gave her and in 1924 made the down payment on what was to become the first Sam Ash Music store. Since then, they have grown to 47 stores. The music store chain’s history mirroring trends in American music.

In the 1950s, for instance, accordions became very popular in America’s living rooms and believe it or not, early rock and roll bands. The store expanded from providing sheet music to local musicians and school children to stocking accordions. In the 1960s, as rock and roll became four mop tops and electric guitars and basses, they stocked Fender Telecasters, Gibsons, amps, picks, wa-wa pedals, and drum sets. When they opened a store on 48th Street, aka music row in New York City, Jimi Hendrix, Rolling Stones, and other well-known and lesser known New York musicians shopped there. 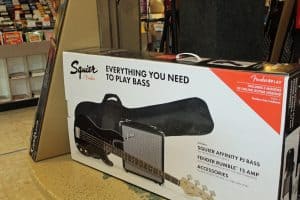 The focus on selling and renting instruments to school children remains a focus of Sam Ash stores, including in Clearwater, where Clearwater High School, Dunedin Elementary, and other band students need instruments. 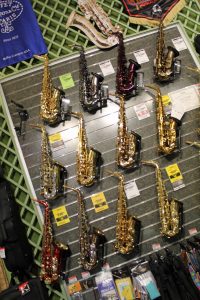 “That was an early part of the store’s history, before World War II and we still provide musical instruments to kids today,” Russo said. “Sam Ash Band & Orchestral Musical Instrument Rental Program offers flexible, cost-effective musical instrument rental program for students at all of its retail locations,” he said.

Feature photo caption: Local musicians come to Sam Ash for their electric guitars. Local celebrities like the Black Honkeys come in for equipment and other musical accoutrements.