Clubbin’ It in Clearwater 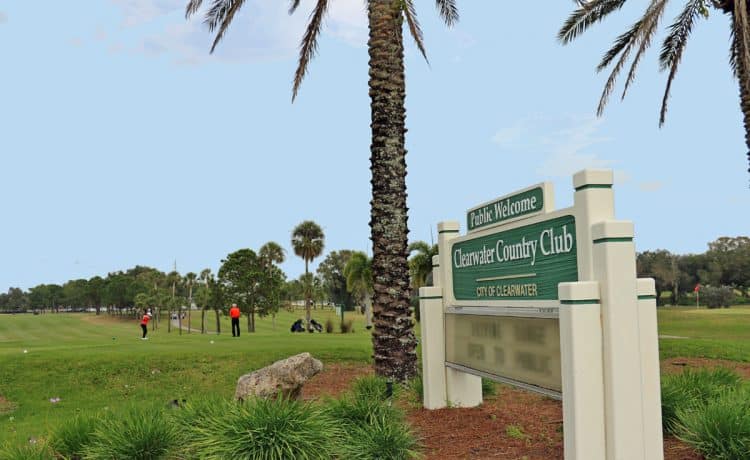 Like a bottle of vintage champagne, Clearwater Country Club keeps bubbling right along. Designed way back in 1920 by famed golf architect Herbert Strong and open for play the following year, it’s an 18-hole, par 72 layout bisected by a railroad track. CCC is what I call a friendly course. It’s not long, it’s not tight, and unlike many Florida courses you won’t encounter water hazards around practically every hole. That said, by the end of the round you’ll have hit pretty much every stick in your bag. Two-time Open champion John Daly plays here from time to time with his son, and some of JD’s golf gear originals are sold in the pro shop. I teed it up recently with pal Ed Bogacki, a lefty who owns the Gold’s Gyms in Tampa and Clearwater. Several months had passed since my clubs appeared on the back of a cart, and the rust showed. A few pull-hooked drives, some less-than-crisp iron shots and a putter that humiliated me that day made for more bogeys than normally appear on the scorecard. Case in point: The 13th and 14th holes present back-to-back par 5s, which is unique. It’s a chance to go birdie-birdie and make up for some over-par strokes. For golf neophytes, on a par 5 a birdie would be a 4 and a bogey a 6. A 3 would be an eagle, and 7 a double bogey. I crunched a nice drive on 13 and hit near the front of the green in 2. So far, so good. My pitch shot, however, ran way past the pin and I two-putted for a par. Okay, not disastrous. And then came hole 14. My heart lurched at the sight of a tee shot that duck-hooked so far left I needed a GPS to avoid getting lost. The second shot failed to clear an oak tree and the ball thudded to the ground as ingloriously as a horse turd. I had no visible shot to the green, so that meant just chipping it back to the fairway. I next skulled a 4 iron, meaning the edge of the club only hit midway of the ball, sending it quail-high into the bunker right of the green. A decent sand wedge still left me 15 feet from the pin, but the putter felt like a jackhammer in my hands and it took three putts to finish the hole. In case you’re not counting, that resulted in one of those double bogeys I was telling you about.

At that point in time, I felt like breaking the putter over my knee, but my temper abated when realizing that Ed had done even worse. Sometimes there’s an advantage to having a playing partner.

In all fairness, however, Ed played pretty well. He’s 6’3″, weighs 260 and is a former professional wrestler. Yet he hit a beautiful-yet-delicate 5 iron to the par 3 11th hole, a high shot with a slight fade that had the ball fluttering to the green like a leaf and settling just a few feet from the pin.

My memorable shot actually cleared an oak tree. I hit my drive way right and had a 7 iron to the pin. It cleared the top of the tree with barely an inch to spare, sailed right to the green and ended up 10 feet from the Promised Land. I missed the birdie putt, but the shot I’d pulled off still made me happy. And that’s the essence of golf. It’s a self-competitive game whereby each shot presents an outcome that will either displease or please you. It’s the pleasing ones, fewer though they may be, that keeps you coming back in an effort to improve your game and lower your score.

Since Ed and I hit occasional mulligans (shots that replace duffed balls), we mercifully decided not to keep score. However, I probably ended up with about an 82, a colossal 20 shots over the current course record of 10-under par 62 by Jon Mansfield.

The current greens fees are quite reasonable. Eighteen holes with a cart is $45 per player if you tee it up before noon; $40 from noon to 3; $35 after 3. The fee for 9 holes is $33 before noon and $29 after. You can choose to walk instead of ride to save a few bucks, but it slows down play. Annual and seasonal memberships are also offered, with a constant array of tournaments, league play and social events. An extra treat: If you’re on the course around 4 p.m. most days, you’ll get a kick out of the train rumbling over the old trestle bridge on the course. You’ll enjoy the golf memorabilia lining the walls and display cases in the hallways, which includes pictures and autographs of past greats of the game and Ryder Cup teams, vintage gear and trophy cases.