Indulge Your Vanity with Great Plates 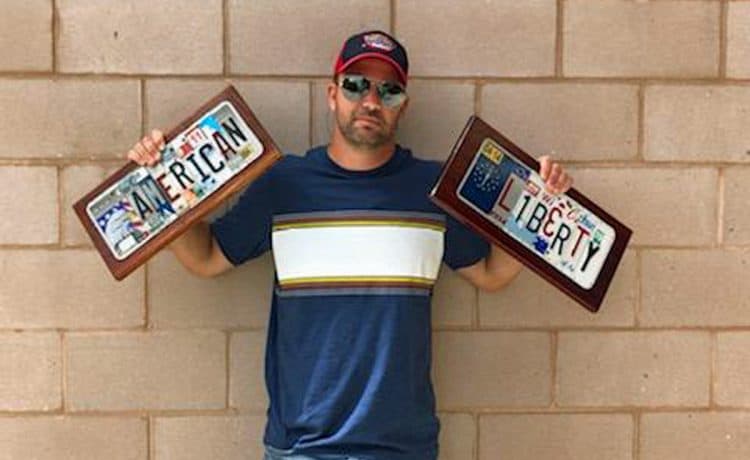 Dan Brooks has spent 20 years in the corporate world and was looking for something more to do – something fun and enjoyable. Brooks began creating art out of license plates under the name Great Plates.

One of his first creations has a unique story: 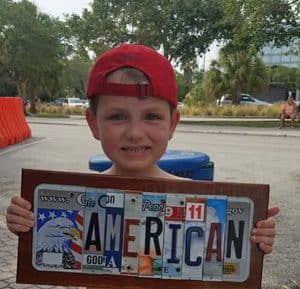 Brooks said, “I made one plate that says ‘American.’ The first plate I found had a picture of an eagle with an American flag on it, so I decided to throw that in there.

“I cut the first ‘A’ and noticed it had the word ‘God’ underneath it.”

“The second ‘A’ had a silhouette of Abraham Lincoln and the ‘N’ had “government” written below it. So there were hidden messages in that piece of art.” 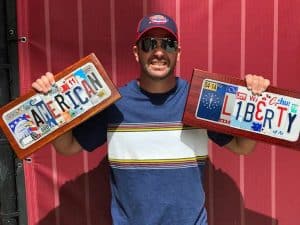 Brooks says every one of his plates does that. In one plate that he made for Morton Myers – a childhood friend and the owner of Dairy Kurl – there is an Olympic torch that looks like an ice cream cone. 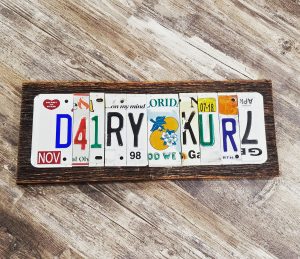 It’s what makes his artwork stick out more from others who do made license plate art – a hidden message. 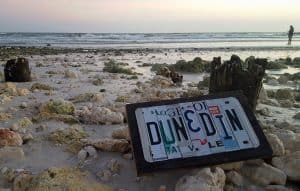 Brooks started Great Plates a year ago and enjoys making them.

When asked how long it takes to make a piece, Brooks said, “The cutting out of the letters is the easiest part. I use a band saw to cut the plates. 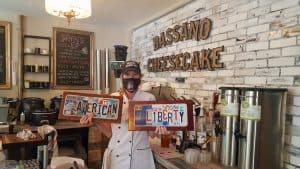 “Getting the wood is the hardest part. At first I was getting walnut and cherry. Other people were using plywood, but that’s not my style. I decided my style is going to be really something special and unique. 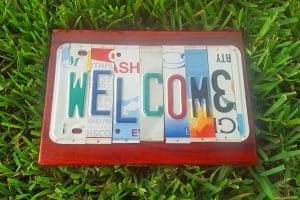 “I would take the walnut and cherry and sand it down, stain and lacquer it. The whole process took about a week. Then I found a guy who sells old barn wood. He collects wood from old barns all over the U.S., rips them up and brings them to Florida or Arizona to sell. The wood doesn’t need to be sanded. I put on polyurethane to keep it preserved. Now the whole process is down to a day.”

Brooks obtains the license plates from salvage yards in Alabama and Mississippi. He also buys them from a dealer in the backwoods of Southwest Georgia. “I basically spent all day hunting for plates. It was muddy and swampy and I was kind of worried about snakes and moccasins and everything else out there.”

He gets a pallet or more of license plates at a time. He also obtains them from estate sales or from people cleaning out their garages. Due to state regulations, expired Florida license plates must be returned to the DMV. 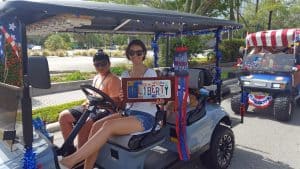 “The whole process has been very satisfying,” he says. Brooks puts on headphones and plays classical music such as Mozart or Beethoven while he creates and makes new plates every week. 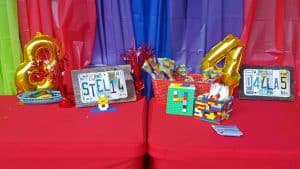 “I find a new door opening up and new opportunities all the time,” he says. Each client has brought another referral.” Brooks has made one for Andi Matheny who owns an acting studio in St. Petersburg and for a baseball card shop in Tampa. 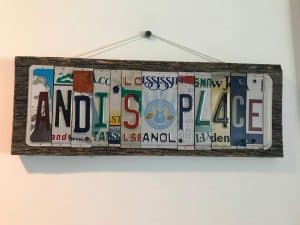 “This whole business replenishes me,” he says. “I like creating things and making them better. You can put the signs anywhere. 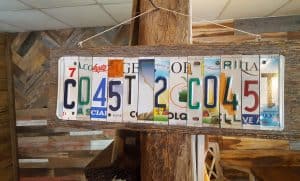 “You can make one with numbers and put it on your mailbox. You can spell out a kid’s name.” 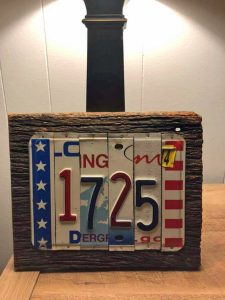 Brooks charges $5 per letter and makes plates for anybody and everybody.

I loved his signs so much, I had Brooks make personalized name signs for my grandkids’ rooms. They loved them! 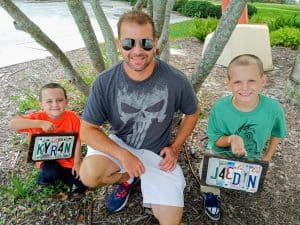