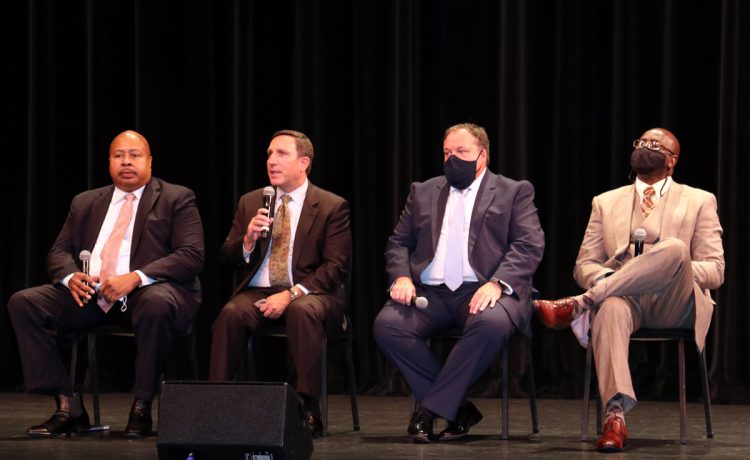 A public forum was held on Tuesday, September 1, at Ruth Eckerd Hall to introduce Clearwater citizens to the final four city manager candidates.

The candidates spoke in alphabetical order in a “fireside chat” on stage with Mayor Frank Hibbard. After the session, the four were on hand to personally meet with forum attendees.

Mayor Hibbard asked the four candidates what their plans of action would be for the first 90 days if chosen.

Dohoney, the first to speak, talked about his plans to build relationships with the community. “I’ve been coming here for years,” he said. “I honeymooned here and have known former Clearwater city manager Bill Horne for over a decade and a half. “We need to find out if we have the right people on the right seats on the bus,” he added, speaking about the city staff. Dohoney also said he’d focus on accountability and work with each city department head about how to reach goals. He would survey residents and make sure all of the departments were evaluated.

Dohoney added that he firmly believes in getting out and connecting with the community. “Transparency and communication are essential,” he emphasized. “I’ve dedicated my life to service in four different communities. I believe in integrity and ethical behavior.” Charles Duggan said that he wants to work with people who want to come to work. “Clearwater has beautiful neighborhoods. I’m looking for a different challenge and looking to grow as a public administrator,” he said. Duggan also said that he plans to make sure to do city staff evaluations and that the public has a say. “Feedback tells city employees how to do a great job in the future and gives them a direction.” Jon Jennings said he’s come to Clearwater many times over the years as a tourist. He believes that Clearwater is an incredibly well-managed city because of the vision that the city council and the community has. “I really want to make a difference and I want to do it in Clearwater,” he said. “The city manager is the glue that works together with city council and residents. The city staff is excellent, but I’m going to hold them responsible too.” Jennings also emphasized the need to communicate with neighborhoods within Clearwater. He said he’s already talked with several neighborhood associations. “I’m not going to be just sitting in an office,” he said. I’m going to be out trying to understand their concerns.” Kevin Moffett, the only candidate with a PhD, echoed his own intention to serve those in the community. “All it takes is a spark,” he said. “I believe in creating relationships.” He added that education, training, certification and licensing were key to making the city staff members the best they can be, saying, “The best employees can best serve.” Questions from the audience were also posed to the candidates, including how the city manager would work with veterans, seniors, the Church of Scientology, underserved areas of the community and whether there should be more development on Clearwater Beach.

Clearwater residents can visit myclearwater.com/citymanager to take a quick survey to share their thoughts on who they would choose as Clearwater’s city manager.

The Clearwater City Council will hold panel interviews with the city manager finalists on Thursday, Sept. 2, 8:30 a.m. to 12:45 p.m. The interviews will not be televised or broadcast on city social media and streaming channels. The interviews will be held in Council Chambers, 100 N. Osceola Ave., and are open to the public.

After the panel interviews have been completed, the Clearwater City Council will have a special meeting at 1 p.m. to discuss the candidates and possibly make a selection. This meeting will be held in Council Chambers and will be televised and broadcast on city social media and streaming channels and is open to the public.

Learn more about the finalists: myclearwater.com/citymanager.