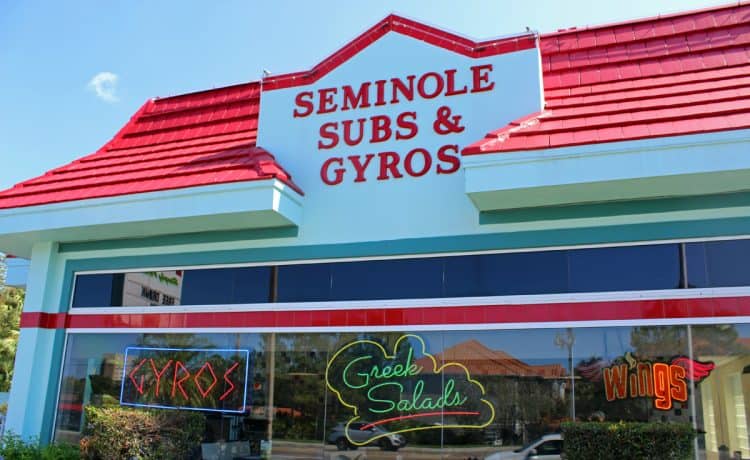 In a city of McDonald’s, Burger Kings, and other fast-food franchises on every corner, it’s always refreshing, and a statement of community support, to eat at a locally owned place. Places like the Clearwater Family Restaurant, Olga’s Restaurant & Diner, and other local eating establishments have local followings.

Manny Vestas opened his location on South Missouri Avenue about 13 years ago. “The first one opened in Seminole about 30 years ago, and it was about seven years after that before the second location opened,” Vestas said. “The restaurants are owned and managed by family. Each of the owners is married, with kids, and we live in and support our communities.”

That’s not just talk, either.

On June 12, Seminole Subs and Gyros owners John Petalas and his son, Bobby Petalas, in conjunction with the Foodservice Restaurant Partners Group, delivered 500 lunches to the staff at AdventHealth North Pinellas as a show of appreciation for all their hard work and dedication during the pandemic. The importance of supporting locally owned restaurants has come into focus as Covid-19 continues to reduce business throughout the nation. National franchises like Chilis, Steak and Shake, and Olive Garden quickly shutter locations rather than live out the storm. “EMTs and firefighters from Clearwater Fire and Rescue on Gulf to Bay eat lunch here regularly,” Vestas said, even as two fire department SUVs pulled into the parking lot. “Clearwater police, city staff, construction workers, bankers, lawyers, teachers, and because we are near Morton Plant Hospital, we see doctors, nurses, and other staff here.” Speaking of the Covid-19 shutdown, Vestas said his location survived the closings by letting people order food through their drive through window.

“We never closed,” he said. “We stayed open the whole time. The drive-through kept the whole thing going. We opened up gradually, first 25 percent tables, 50 percent, and we’re now at 100 percent.” The website states: “Conceptualized and created in 1992, Seminole Subs & Gyros was originally founded on the idea of providing generous portions of food at an affordable price.”

Vestas is dedicated to that 28 years later.

“We serve good food, maintain a clean restaurant and atmosphere, it’s a simple come-in-and-order-and-sit down, nothing premade, everything we do is fresh daily, nothing frozen,” he said. “We do it without waitresses, nothing against them, it’s just a quick, easy lunch.”

The young man stands proudly before his business.

“I have about 13 locations at this location, serving our customers seven days a week. We’re open until 11 p.m. on weekdays and midnight on weekends,” he said. “We are at 100 percent capacity.”