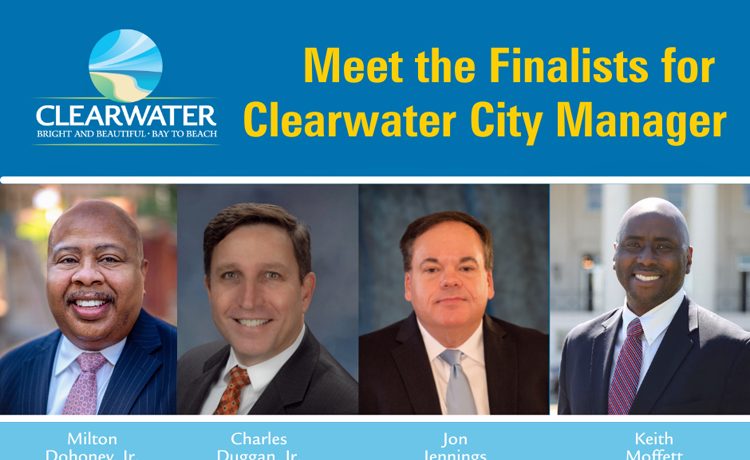 The City of Clearwater invites the public to a community forum to meet the panel of city manager finalists selected by the Clearwater City Council.

The community is invited to attend the forum on Wednesday, September 1, at Ruth Eckerd Hall, located at 1111 McMullen Booth Road, Clearwater. The forum will be from 5:30 to 7 p.m., to meet the following candidates:

The community forum will follow a day of individual interviews of the candidates conducted by the mayor and City Council, and a meet-and-greet with city administration.

The format of the public forum will be as follows:

On Thursday, September 2, the City Council will then interview the candidates beginning at 8:30 a.m. in City Hall Chambers, in the Clearwater Main Library, at 100 N. Osceola Ave. These interviews will not be televised or streamed online but will be open to the public.

Following the morning interviews, the council will conduct a meeting at 1 p.m. to discuss the candidates, which will be open to the public, televised on C-View TV and streamed online and on city social media channels. Milton Dohoney, Jr., a resident of Phoenix, Ariz., offers more than 30 years of municipal management experience. Ending in February 2021, Dohoney served as assistant city manager in Phoenix, with oversight responsibilities for Law, Police, Fire, Emergency Management, Convention Center, Library, and major events, such as the Super Bowl and NCAA Final Four. He additionally served as the incident commander for the city’s response to COVID-19. Prior to Phoenix, Dohoney served as city manager of Cincinnati, Ohio, for eight years, coordinating the efforts of more than 6,000 employees. Other key appointment include Chief Administrative Officer of the Lexington Fayette Urban County Government (Kentucky), and several positions with the city of Louisville, Kentucky, to include Deputy Mayor (Chief Administrative Officer), Director of Public Safety, and Assistant Director of Community Services. Charles Duggan, a resident of Redlands, California, has served as Redland’s city manager since 2020. Redlands is a premier city of 72,000 population in the San Bernardino area. Immediately prior to Redlands, Duggan served as administrative services director for the Marin Municipal Water District in California.

From 1991 to 2017, he was employed by the city of Auburn, Alabama, the last 11 years as city manager. Auburn, with a population of approximately 65,000, is the home of Auburn University.

Duggan, a graduate of Dunedin (Florida) High School, earned Bachelor of Science and Master of Business Administration degrees from Auburn University. Duggan has attended executive leadership training from both Harvard University and the University of Virginia, and he has served on the Board of Directors of the Alliance for Innovation and for ICMA. Jon Jennings, a resident of Portland, Maine, has served as Portland’s city manager since 2015. He manages a staff of about 1,300 and a $292 million annual operating budget. He previously served as assistant city manager for the city of South Portland, and previously was involved in numerous private sector endeavors in the Portland area, to include a land development partnership, partial ownership and coaching for the NBA Development League Maine Red Claws, and a restaurant franchise, among other endeavors. Jennings was awarded a White House Fellowship and served as a senior advisor in the Clinton administration. He also serves as a visiting scholar for Stonehill College.

Jennings earned a Bachelor of Science degree from Indiana University and a Master of Public Administration, Business & Government from Harvard University. In addition to the White House Fellowship, his awards include the Maine Town and City Management Association Leadership Award, the Anti-Defamation League World of Difference Award, and the Boston Jaycees 10 Most Outstand Young Leaders Award, and several basketball coaching awards, among others. Keith Moffett, a resident of Lizella, Georgia, serves as the county manager for the Consolidated Government of Macon-Bibb County, Georgia, with a staff of more than 1,800 employee and an overall budget of $560 million, an appointment he has held since 2018. Prior to his current appointment, he served as the county administrator for Butts County, Georgia, with similar duties supported with an overall budget of $35 million dollars and with more than 230 budgeted employees. Previous experience has been in the Mayor’s Office for the city of Macon, Georgia, in various leadership positions. In January 2014, the city and Macon and Bibb County consolidated, and Moffett was appointed director of the Emergency 911 Operations Department, responsible for the management and daily operations of the county’s emergency communication center. He also served as the city of Macon’s director of internal affairs, assisting the Mayor and Chief Administrative Officer with the Legislative agenda, and serving as mayor’s liaison with Macon City Council, state, and federal officials affecting local government.

Moffett was awarded a Bachelor of Science from Macon State University, an Executive Master of Business Administration from Wesleyan College, and a Doctorate in Educational Administration from Mercer University. An US Navy veteran, Moffett has been recognized as a distinguished alumnus of Macon State College School of Business. He is a credentialed manager from the International City County Management Association, and he holds certifications as a Certified Public Manager, in Public Financial Management and Municipal Revenue Administration. Moffett additionally holds various certifications in economic development from the state of Georgia.

(Alfred Fletcher also was selected as a finalist. The city was informed Aug. 11 that Fletcher has withdrawn from the process after accepting a position in North Port, FL.)

Information and photos courtesy of the City of Clearwater