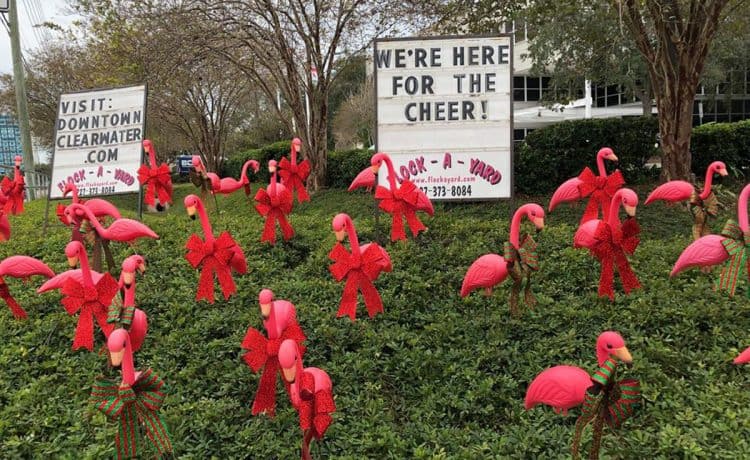 If you’ve driven around Downtown Clearwater in the last two weeks, you might have noticed something a little different – front yards littered with plenty of plastic pink flamingos.

Imagine: a flock of flamboyant flamingos, decked out with glittering big bows of green and red, in hot spots across the city, spreading cheer and joy to all that pass.

The sign says it all – “We flew in for the holidays downtown!” or “We’re here for the cheer!” But what exactly does that even mean?

With Flock-A-Yard, the City of Clearwater takes over public spaces with a fun, Instagram-worthy photo opportunity to get the city’s residents and visitors in the holiday spirit! Fans can follow the online pictures on social media – like Facebook, Twitter and Instagram – using the hashtag #hereforthecheer.

The City of Clearwater Community Redevelopment Agency is organizing the event.

These special holiday flamingos have been landing around downtown as part of the 3rd Annual Holiday Extravaganza, that began with two gatherings at the Clearwater Municipal Services Building on Myrtle Ave. and at the 1100 Apex apartments at 1100 Cleveland St.

The most recent landings occurred at Peace Memorial Church, at 110 S. Fort Harrison Ave; the Clearwater Fire Department’s Station 45 at 1140 Court Street; the Harborview Corner at N Osceola Ave and Cleveland St.; and at Red Royal Electric at 717 Drew Street.

But it’s not too late to get your photo ops with the fantastic flocks and share them on social media! You can come on out to see them three more times.

On December 18, you can spot them at the Docuphase Building at 1499 Gulf to Bay Blvd.

On December 21, they will appear at the Community Gardens on Cleveland St. and N. Betty Lane.

The City of Clearwater outsources the flocking to a company, Flock-a-Yard at flockayard.com, who take them safely inside (to roost presumably) at night. So don’t go looking for the birds at 8 p.m., as I did!

Clearwater’s Flock-a-Yard program kicked off the city’s 3rd Annual Holiday Extravaganza, which offers a number of free events for all ages throughout the month of December to celebrate the holiday season in Downtown Clearwater.

And remember to share your photos with on social media using #hereforthecheer!

For a closer map of upcoming Flock-A-Yard locations and other holiday events through December 23rd visit https://downtownclearwater.com/event/flock-a-yard-8/.

Information and some photos courtesy of the City of Clearwater

Swing into High Gear at the Suncoast Jazz Festival