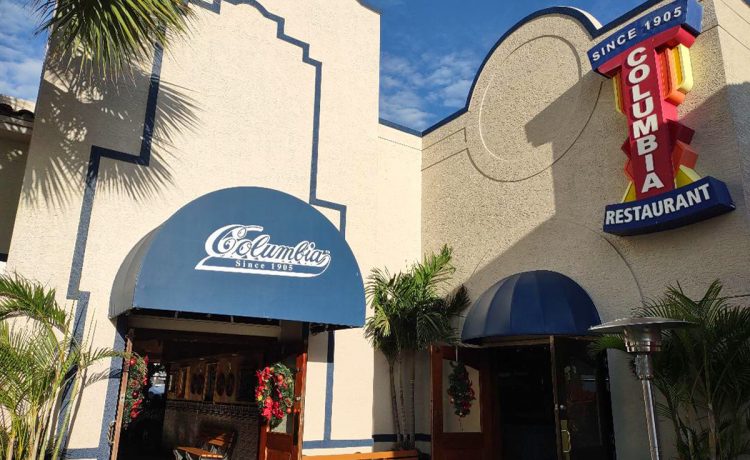 I visited the original Columbia Restaurant in Ybor City when a teen. Dad, born and raised in Tampa, would take our family for a week each summer from Homestead Air Force Base where he was stationed to Tampa to visit relatives. At least one night would be dedicated to munching out Spanish style at Columbia.

I’d never before witnessed flamenco dancing, and decades later I still vividly remember enjoying dinner while aghast at the dramatic dancer’s boot stomps on Columbia’s hardwood floor, his Zorro-like hat, flowing black cape and the rhythmic clicking of castanets in each hand held high in the air. How unique. How entertaining.

What began in 1905 by Cuban immigrant Casimiro Hernandez Sr. and the Gonzmart family remains such five generations later and boasts being the oldest restaurant in Florida as well as the oldest Spanish-themed eatery in the nation. But it’s the distinct quality of the food that’s formed an army of repeat customers. Not surprisingly, over the years other locations popped up in Sarasota, Celebration, St. Augustine and Clearwater with cafes at the Tampa Bay History Center and Tampa International Airport.

A few months ago, a companion and I visited the Columbia Restaurant on Sandy Key in Clearwater that overlooks the Intracoastal Waterway. We liked it so much that it merited a return visit. Accordingly, we recently made a reservation and arrived early. The desk hostess found my name and provided two menus to a seating hostess. We requested an outside table where we didn’t have to huff up and down stairs. We were dismayed being led down a short flight of stairs to a table three rows behind the waterfront tables. Were the hostesses deaf? Seven minutes after being seated, a young Latin waiter introduced himself and stated that our assigned waiter had only been employed two weeks and was a bit behind in keeping up. Appreciating his thoughtfulness, we requested an iced tea and a glass of water. Seth, our quite tall and lean waiter, arrived six minutes later, apologized for the delay, and took our orders. My companion selected the Scallops Casimiro entree – named after the founder – with a side portion of Cesar Salad (it’s not spelled Caesar on their menu). I ultimately chose the Cannelloni Langosta with a side dish of Platanos Maduros. Seth later provided loaves of warm Cuban bread and a small dish of butter. Maybe it’s just me, but I always end up asking for more butter to coat each bite of bread. When instead provided vinegar and oil with rolls, each bite gets dipped.

The salad tasted okay but the dish of scallops was delightful in a casserole of lemon butter and white wine with a sprinkling of toasted bread crumbs. My companion generously offered me one of the scallops and – solely in the interest of research, mind you – I accepted. A wise decision indeed.

I wavered between a choice of Roast Pork a la Cubana as an entrée that I sampled the last visit. It consisted of a juicy loin soaked in a tastebud-pleasing garlic marinade. However, usually being one who’s willing to try something different even though I usually end up regretting it, this time I hit the jackpot with the Cannelloni de Langosta. Oi vey, I savored each delightful bite and silently thanked myself for being adventurous. The two warm cannelloni pastas didn’t last long as they burst with generous chunks of lobster, shrimp, scallops and sauteed shallots in a lobster-sherry cream reduction and topped in a savory Mornay cheese sauce. Senor Hernandez, I look forward to meeting you in the hereafter and planting brotherly kisses all over your face.

The dish of Platanos Maduros – sweet plantains (banana strips) fried in an oiled skillet – made for a tasty accompaniment. I’d be happily fulfilled just consuming a plate of maduros for dinner as I never dine at a Latin restaurant without ordering them as a side dish. If you haven’t tried them, do so and you’ll be exclaiming “estoy muy feliz.” Seth, appearing to be hurried much of the time, did return to our table to refill drinks, bring more butter and ask if anything else was needed. However, nary a smile crossed his face until he presented the check. It’s always a put off when some waiters do that. Even peering through heads at tables in front of us and the wooden railing, the glimpses of birds and boats on the IC was quite pleasant. Although I knew from the last experience here that a finale of Columbia’s bread pudding would be too much to totally consume even for two people, I ordered it anyway. Heck, whatever doesn’t make it from fork to mouth at dinner makes for a lovely midnight snack. It’s easily the best bread pudding I’ve ever tasted, a heavenly concoction of white chocolate, Cuban bread, milk, eggs and topped with an exquisite rum sauce. A slight disappointment involved this portion of bread pudding being noticeably smaller than on my prior visit and it lacked the same quantity of rum sauce. No matter, I made good on the vision of a late-night morsel, heating it in the microwave after adding atop it a chunk of butter mixed with a skosh of cinnamon sugar to go with the rum sauce to make it moister.

When again getting a hankering for a splendid Spanish-inspired dinner, I’ll for sure revisit the Columbia Restaurant but will do so at the original establishment. In that way it will spur fond memories of dining with my parents and relatives long ago. I’ll also book a table when a flamenco dancer does his thing, a presentation only at the Ybor City location. For a choice of locations and to view the full menus, visit columbiarestaurant.com.