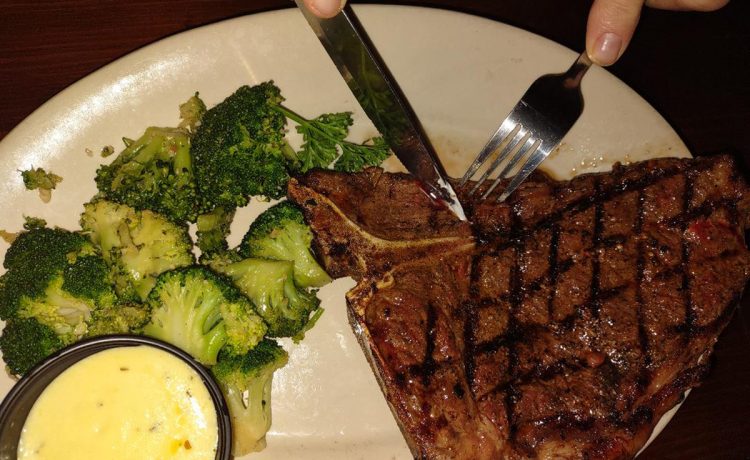 I recently joined a crowded restaurant at Harold Seltzer’s Steakhouse on Gulf to Bay Boulevard with a companion. Seated against a wall at a small table for two, it became a bit jammed in terms of available space when our dishes arrived later.

After a wait of 16 minutes, waiter Philip appeared and apologized for the delay. He seemed to be in a great hurry as he took our drink orders for a glass of water and an iced tea, at which point he attempted to leave. When we requested to put in our dinner orders since we’d already fully perused the menu by that time, he half-heartedly agreed.

We chose the loaded potato skins as an appetizer and a cup of the lobster bisque. For entrees my partner ordered the baked brie as an entrée while I picked the 20-ounce porterhouse steak cooked medium-rare. Philip soon delivered our drinks and provided a basket that included dinner rolls and large, crouton-like crumbs that we really liked.

The skins arrived in a timely manner and were hot, crispy and tasted good. The bisque mistakenly was a bowl instead of a cup, but the shopper accepted it anyway. It contained few lobster bits but the broth tasted good.

The brie turned out to be satisfactory – neither remarkable nor deplorable. Unfortunately, things went downhill from there. My porterhouse didn’t appear to be 20-ounces in size even considering shrinkage when cooked. A porterhouse combines a strip steak with tender filet on the other side of the bone. In this presentation of my steak, the filet mignon barely consisted of three bites. Worse yet, it was prepared medium well, not medium rare.

I pointed out the latter to the waiter on the only occasion he checked on us to ask how everything tasted. When I told him about the porterhouse being dry and overcooked, he shrugged, saying “I’m sorry, sir.” He then did a 180 and all we saw was his back as he scurried away. No suggestion was uttered to provide another steak cooked properly or to summon a manager or other typical remedy such as a check credit or comp dessert when lodging a legit food quality complaint. A customer should have to request a specific remedy and we didn’t. The waiter evidently had only asked the perfunctory question about how everything tasted and didn’t want to deal with an honest answer.

At one point our drink glasses stayed empty for 22 minutes – most of the time with our entrees present – until we finally asked the busboy to provide them. He did so immediately with a broad smile in contrast to the non-smiles of the wait staff we witnessed. Everyone appeared to be rushed – the waiters, a man and woman constantly walking into the dining room to assess which tables were available – and amid the high energy and the din of crowd noise reverberating against our wall it killed a relaxed and pleasant atmosphere. Instead, we felt like just another couple of cows in crowded corral.

Even when presenting our check, Philip slid it onto the table and left in a nanosecond to serve other tables in his area. Perhaps he’d been assigned too many customers to give each diner adequate attention, maybe not.

In an act of mercy, I decided to return to Harold Seltzer’s restaurant a week later with my friend. Autumn was our server and while competent and quick to refill drink glasses, nary a smile was conveyed. She also didn’t tell us about the specials as did the waiter to customers seated after us at an adjoining table, such as the New York Strip for $22.95 and other items such as the fish of the day being mahi-mahi. I tried the one-pound prime rib, which the restaurant boasts is the best in town. While I’d refute that claim, it was good in taste. An accompaniment of cream spinach was also flavorful. Our only gripe is that we sat for 40 minutes before our entrees arrived even though the dining room was half filled. Again, the only smiling employee we encountered was the same busboy. All others were cordial but horse faced. Evidently a friendly comportment isn’t required by management.

Pricing is very reasonable and some would say cheap, and if your bag is U.S. Choice cuts instead of prime meats and don’t require upbeat and prompt service, Harold Seltzer’s will be adequate enough. Unfortunately, it’s not enough for me to merit another visit any time soon.

NOTE: The author is not reimbursed for any cost relating to his or her dining experience, and the establishment reviewed is not forewarned about the visit.