HomeRestaurantsNothing Could Be Finer Than This Li’l Diner
Restaurants

Nothing Could Be Finer Than This Li’l Diner 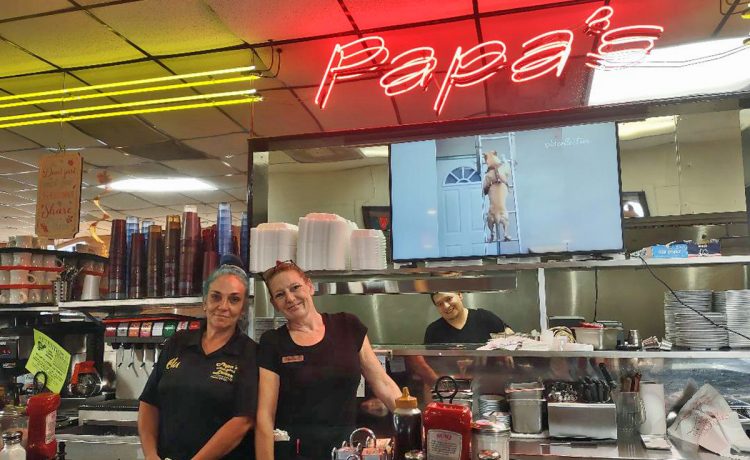 It’s 2:30 a.m. I can’t sleep. I’m hungry, but there’s nothing I crave at home and nothing’s open around town, not even the fast-food joints. Oh wait, what about that diner I’ve passed on Gulf to Bay Blvd. a hundred times? Eh, at this time of night the food’s probably just so-so and nothing but semi-coherent drunks slumped over the tables.

After staring at the ceiling another 30 minutes, a growling stomach compels me to get dressed and drive to the diner anyway.

And then a pleasant surprise – it’s a diner, all right, but it’s clean, the wait staff is fast and friendly, the food delicious. Since that experience eight months ago, wife Kelly and I became regular customers. Although we seldom drop by at odd hours of the night, it’s downright comforting to know there’s a place open in town no matter when the munchies hit. I present to you Papa’s New York Diner just west of the intersection of Keene Road on G2B Blvd. It’s a diner ambiance from the first moment of entry. The entrance presents a vestibule with a Toy House, its claw waiting to be lowered to snatch a toy. Nearby is Izabella, a glass-encased gypsy who tells fortunes for a buck. The restaurant seats up to 80 with tables displaying ads for local businesses and a counter with seven stools reminiscent of the old drugstore soda fountains of bygone years. The diner opened seven years ago and the existing structure was enhanced with tiled and mirrored walls to offer and more vibrant and appealing mood. Muad “Mike” Saeed, 22, oversees the business. Always smiling, greeting customers and stopping by tables to make sure all is right, he grew up in Rochester, New York, and now lives year-round in Clearwater.

He reflected on how the eatery has become popular with residents and visitors.

“When we first bought the diner, only one TV existed that ran nothing but hard news focusing on political issues,” he said. “We put in additional TVs with the main one showing only ‘The Pet Collective’ channel with entertaining scenes of family dogs and cats – it changed the atmosphere in a very positive way.”

Besides an extensive menu offering appetizers, salads, soups, sandwiches, full dinners and breakfast 24/7, the diner bakes all its own pastries such as chocolate cake, cannolis, baklava, tiramisu and cheesecakes. Kelly and I seldom dine without a culmination of yummy slices of  chocolate cake with two scoops of vanilla ice cream. Yeah, I know, oink oink, but beware because you can easily become a fellow addict. Mike oversees a wait staff of 14 and four cooks. He hires those he deems to possess positive energy. “They become family members to me,” he said. “They work hard and like a team we depend on each other. In the end, we all want customers to leave satisfied.”

The food is consistently good in taste with specials each holiday. Mike said that favorite choices include the skillets, French toast and the fried chicken sandwich, the latter enhanced between slices of sour dough bread instead of buns. My favorite entrees include the pork sandwich, the baked half chicken and the chicken parmigiana. “We always try to present food as we’d like it to be served to us,” said Mike. As you might envision a New York diner to be, it’s sometimes loud and lively and other occasions calm and serene. We especially enjoy servers Sheila, Brittany, Blue, Alex, Liz and Rachel – colorful characters indeed – who always find time for a bit of fun chat despite zipping around like busy bees to cover their tables.

You just gotta check out Papa’s New York Diner, open 24 hours every day. All I ask is that you don’t order the last slice of chocolate cake.