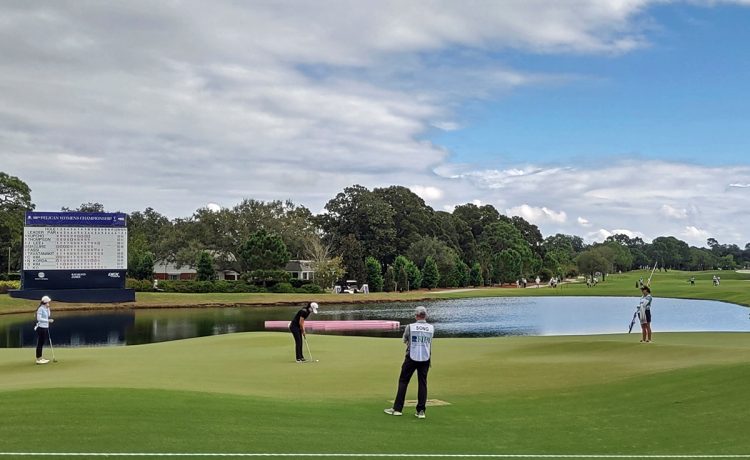 By Doug Kelly and Kelly Kelly

It’s quite inspiring to watch the lady pros crunch 270-yard drives, hit precision iron shots and sink putts with far more regularity than I’ve ever done it. Kelly and I spent Saturday afternoon as media members of the gallery at the Pelican Women’s Championship held at Pelican Golf Club in Belleair, Florida, which this year runs from November 11 – 14, 2021 and is presented by Konica Minolta and Raymond James. After an afternoon shower stopped play for about an hour, the resumption of golf entailed only a soft wind and softer greens, making for lots of scores in the 60s on the par 70 layout. We watched a junior clinic headed by touring legend Chi Chi Rodgriguez and two lady pros who’d finished their round, and I couldn’t refrain from posing in front of my dream car — a Lamborghini. Anyone getting an ace during the tourney receives a free two-year luxury lease! Today wraps up the championship, with Lexi Thompson and Nelli Korda sharing the 54-hole lead at 16-under par. It’s gonna be a thrilling finish and it’s televised!

Rolex Rankings No. 1 and Bradenton, FL native Nelly Korda recorded eight birdies on Saturday for a 7-under par 63. Eleven-time LPGA Tour champion Lexi Thompson found her way to six birdies to shoot a third-round 65. These two Americans are tied for the 54-hole lead at 16-under overall.

Visit the final day of the Championship for yourself or follow the excitement:

FEATURED HOLE COVERAGE (all times Eastern on Peacock in U.S. and lpga.com for International)
Sunday, November 14: Live from 9:45 a.m. – 3 p.m.