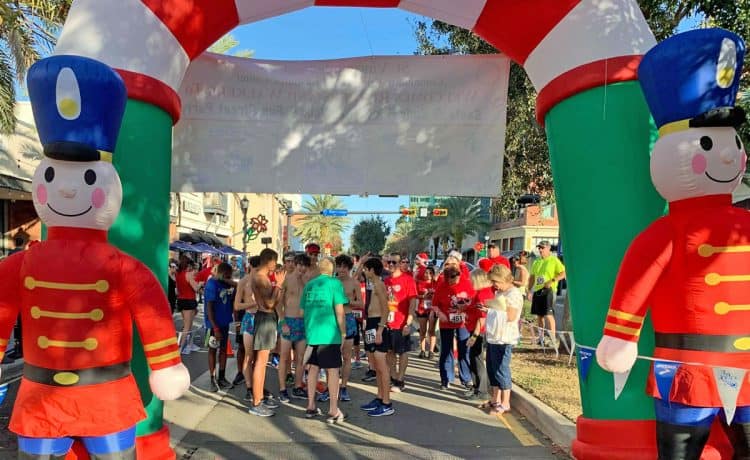 O the weather outside was delightful, The December 8 fundraising event totally nailed it with plenty of donations and a much better future for many of our homeless and displaced residents. Clearwater Mayor George Cretekos officiated the final race of the day and welcomed the contestants and saluted volunteers. Others participating included Bill Johnson, who is running for mayor, and Lina Teixeira and Bruce Rector, both running for councilmember in the election coming up in March. While many came for the fun, fellowship and charity, a strong contingent of competitors really put “their feet to the street,” including some record-breaking times. Hoehnen joined her significant other, James Stuht, both first-time Clearwater visitors who found out about the event online. They headed home with a most unique souvenir: a large engraved beer mug. Clearwater Central Catholic students along with Principal Jim Deputy provided a strong presence with 15 student volunteers. Many of the volunteers helped with the set up and then ran competitively. Principal Deputy arrived at the event on a scooter attired as one of Santa’s elves while Mrs. Deputy dressed as his helper.

Long-time residents Reuben & Kitty from Clearwater Bay ran for the first time in the event. After the run, they shared with me how much they enjoyed it and expressed appreciation to St. Vincent dePaul for putting it all together. We look forward to seeing them next year. Thank you Ginger Bozied, and the Bozied group for your continued support and participation.

While taking pre-race photos, Mark and Polly Fredericks and Dale & Ed McClare happened by.  They were thrilled to cross the Causeway (it’s steeper than you think) and look forward to supporting next year’s race.

A very poignant moment occurred at the Registration Pick-Up at O’Keefe’s Tavern in Clearwater the day before on Saturday. I met Carol who was picking up her t-shirt, bib and belles. She said this would be her first 5K and that she and her friend Judy signed up to walk the event and will do so again next year. After the race, Carol shared with me that the event really hits home because her father worked for St. Vincent dePaul as a dock loader for more than 10 years and her 5K walk would be in honor of his memory. During the Holiday Season, let us take a moment to reflect on those less fortunate. Every day, 365 days a year, some 150 people of all ages from all walks of life show up at St. Vincent dePaul Community Kitchen and Resource Center. They receive a nourishing and “stick-to-the-ribs” meal, with a side of hope to enable a path out of homelessness. The new program provides job training, employment skills, counseling, transitional housing and support for a life off the street. Launched in only March with a conservative initial goal of helping five homeless people, to date some 26 residents are clean and sober, employed and living in a stable environment. It’s all about food AND a future.

Let’s do it again next year, only this time we hope you will join us for all the fun and excitement with the 2020 rendition of St. Vincent dePaul’s Santa & Suds 5K Race.