The Protectors of the Bridge 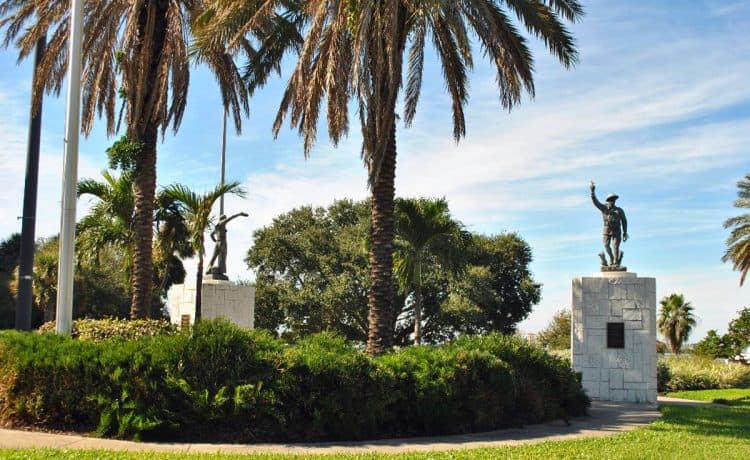 On Armistice Day in 1927, nearly 25,000 people attended the dedication ceremony of the newly constructed Soldiers and Sailors Memorial Causeway and Bridge in downtown Clearwater. To honor the memories of the 38 men who never returned home after World War I, the city also dedicated two statues by E.M. Viquesney. The first statue, The Spirit of the American Doughboy, shows a doughboy walking through barb wire and tree stumps. He clutches a grenade in his up-raised right hand, and his rifle in his left hand.  It represents the American soldier, who stands ready to defend the city. Nearby, a second statue stands in honor of the Navy, The Spirit of the American Sailor. The sailor waves his cap, as though greeting all who approach the bridge. The statues stood watch over those travelling to Clearwater Beach for decades, part of a limited collection of Viquesney’s work. The Doughboy is considered Viquesney’s finest work and took two years to create. While the image was duplicated in relics and print form during the post-war era, the statue is one of less than 200 that were created. Others remain in various places around the country, a reminder of both the era of days gone by, and the brave soldiers who have fought on our behalf.

What is a Doughboy? There doesn’t seem to be a clear answer about where the term ‘doughboy’ came from.  Some speculate that the name originated in Britain, as the soldiers there were fond of eating fried flour dumplings known as ‘doughboys’. Others claim the nickname was a result of Calvary men who made fun of foot soldiers for their rounded, donut-like buttons on their uniforms. Regardless of where the name began, the nickname for soldiers stuck and was used until the late 1940’s. Today, the statues continue their careful watch over Clearwater Harbor. During their almost 100-year tour of duty, the statues have kept watch through the development of Clearwater from a sleepy farming town, dotted with orange groves into a bustling city. They endured through the wind and waves of various storms, stood watch as millions streamed by to play on the sand of Clearwater Beach and kept careful guard over the travelers who used the Memorial Causeway. In early 2002, the statues were removed, taken to storage while the Memorial Causeway was rebuilt. While the bridge was being worked on, the statues got some much-needed repairs of their own.

Over the years, the bases of the statues started to wear down due to the ravages of saltwater and sun. The Doughboy’s barb wire went missing, and the bayonet and stock of his rifle were lost through time. The thin copper of the statues was wearing out as well. Tucked into a warehouse in Clearwater, Frank Colson, a sculptor from Sarasota, gave the Doughboy and Sailor the attention they needed. Mr. Colson had previously made the acquaintance of the statues when he created a mold of the Doughboy in the late 1990s and crafted a copy for the city of Sarasota. With their repairs completed, new bases were built, and the sculptures were re-installed at the base of the newly constructed bridge. A historical marker tells the story of the statues, once again standing watch over the bridge and the residents and visitors of Clearwater. A re-dedication ceremony on November 10, 2006 celebrated their return, and with a beautiful courtyard surrounding them, they are content once again.

On your next trip through downtown Clearwater, look for the Doughboy and Sailor off Court Street as you approach Memorial Causeway.  Say a silent ‘thank you’ to the doughboy for his diligence as you head off to enjoy the beauty of the beach, and wave back at the sailor as you head home, grateful for the freedoms they protect.